Sri Lanka has a long history of narrating “Jathaka Katha”, stories of previous lives of Lord Buddha which teaches moral values, in many different ways. The most popular form of had been other than reciting in verses was presenting Jathaka Katha, in picture form painting Jathaka stories on walls of temples. Each Jathaka Katha usually consists of several painted scenes which tell the story in sequence. 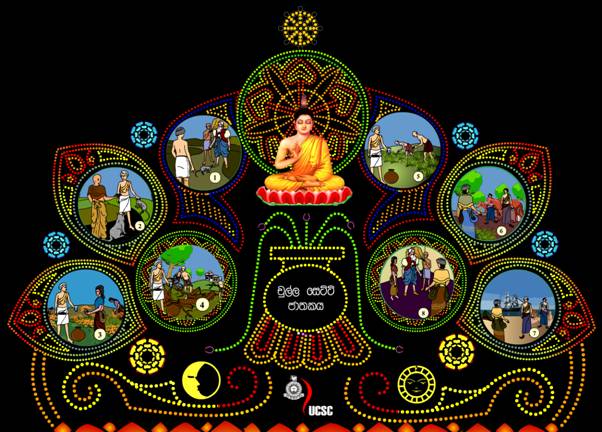 This form of narration of Jatha Katha has been developed into Thoran tradition which is unique to Sri Lankan Buddhist culture. In the old days, a simple painted story was shown in the night in the candle light fixing candles or lamps for each scene. In the twentieth century, with the advent of light bulb, each scene was boarded with different colored lights which created attractive patterns and sequence of different lighting patterns was electronically programmed. Thorana is usually accompanied by singing or reciting the story in verses and they are in the special form of poetry reciting or singing which is known as “viridu”; and certain thorana is accompanied by dialog in addition to the reciting.

With the popularization of Information Technology and Computer graphics, several people had experimented to create thoran on the computer and one of the institutions which had tried out Thorana on the computer was University of Colombo School of Computing (UCSC). Using Macromedia flash, it was realized that similar effect of traditional thorana could be created. The majority of these experimental thoranas was confined to computer screens and was on only the web until now.
It was decided to display a digital thorana for the first time on a large screen as part of Vesak celebration activities which are organized by University of Colombo and especially to mark 2600 of Sambuddha Jayanthi. The 20’* 20’ screen was constructed at the edge of University grounds facing Thunmulla junction. The story which was chosen for thorana has been Chulla Setti Jathakaya which teaches on results of hard work in combination of wisdom and intelligence (Pranja).

Scenes of the story were individually drawn by Mr. Nirmala Handapangoda of Software Development Unit of UCSC using Flash. Viridu was composed by Mr. Kamal Waleboda, Senior Lecturer and head of Journalism unit of University of Colombo. While the story is narrated in viridu form, each scene corresponding to narration is enlarged which is not possible in a traditional thorana.

Digital Thorana is released on Open source license with a tutorial to create digital thorana. Thorana will be on the Internet as part of Darama dana. This event is funded by National eLearning centre of UCSC.